A downloadable game for Windows and macOS

Only the Prologue is out! Ch.1 coming soon!

Players take on the role of Moira Inoue, a private investigator who runs the business “Fate Finder.” Clients come to Moira in search of answers as to who is their soulmate or why their supposed twin flame is acting suspiciously.

Moira wonders why she cannot see her own red string of fate, maybe the truth would hurt more than it would comfort. Perhaps, the reason she cannot see her red string is that it is nonexistent. By completing the cases, players unlock more of Moira’s story and options to explore and discover the truth of whether she has a soulmate of her own or not.

I love the demo and the premise! The art for Moira and the shrine is great! I'm currently trying to create my own game, so I understand the massive challenge you are facing but you are killing it! I have some hopefully helpful notes

Overall, this demo is wonderful and I'm excited to see more of this game! I don't mean to be nitpicky, I just see so much potential in this game and want it to succeed. :)

Love the demo so far, and I was hooked at the end. I was so ready to cause trouble until boom, end demo.

Thank you so much and I'm glad you liked the demo! Also thank you for the feedback, it is something we can think about in a future update.

Nice start of your visual novel, characters are great and I like the music 🥰

Thank you so much! I'm glad you enjoy it.
I did not make this project by myself, so check out our writer and artist as well.

The next chapter is coming soon! 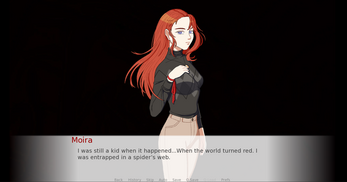 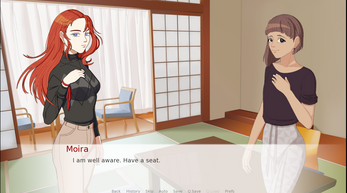 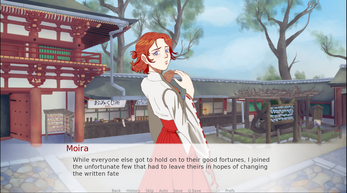